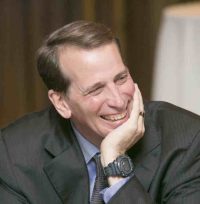 In 1984, Doug Lasdon founded the Urban Justice Center as a one-person operation in a burned-out building in East Harlem, to provide badly needed legal services to one of New York City’s most underserved populations – single, homeless adults. To make his services accessible to his clients, he conducted outreach legal clinics directly in soup kitchens, making us the first organization in the country to use this approach.

Since then, Doug has greatly expanded the agency’s size, scope, and influence, while still holding fast to its core mission – helping those at the farthest margins of society, both one at a time and collectively. Doug is now spearheading the agency’s new Social Justice Accelerator, which mentors the next generation of social justice leaders.

Currently, Doug is an Adjunct Professor at the Cornell Law School where he teaches Poverty Law and Social Entrepreneurship.  He has also been on the Adjunct Faculty at New York University from 1987-2019, where he taught Law and Urban Problems. In 2019, he taught in the J-Term at the William S. Richardson School of Law at the University of Hawaii. Over the years, Doug has served on many Boards and Advisory Councils. Currently, he sits on the Board of Justice Project Pakistan. He has also served as a consultant to the World Bank, and as a Wasserstein Fellow at Harvard Law School. He spent the Fall 2017 semester as the Distinguished Practitioner in Residence at Cornell Law, from which he received his law degree.

Prior to founding the Urban Justice Center, Doug was a Fellow and Staff Attorney at Covenant House in New York City. His undergraduate degree is from the Wharton School at the University of Pennsylvania.

WANT TO JOING THE FIGHTING FORCE?