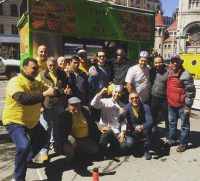 Walid Abdelwahab is a street vendor who is originally from Egypt, and for the last ten years, he has sold food on the Upper West Side of Manhattan. In November of 2016, the owner of a building adjacent to his long-term vending location illegally placed a concrete planter box in Abdelwahab’s spot, in an attempt to force him to leave. When Abdelwahab moved the box, the building owner had him arrested – illegally.

Thankfully, Abdelwahab is a member of our Street Vendor Project, who brought a lawsuit against the city for unlawful arrest, since Abdelwahab had not committed any offense. After seven months of litigation, the City agreed to settle the case for $10,000, and Abdelwahab was able to return to his spot and the community that had come to depend on his food.

SVP has filed other civil rights cases for vendors who have been wrongfully arrested by members of the NYPD in the past. We hope that filing these types of cases will not only result in compensation for our members’ injuries, but also deter the NYPD from similar aggressive enforcement in the future.