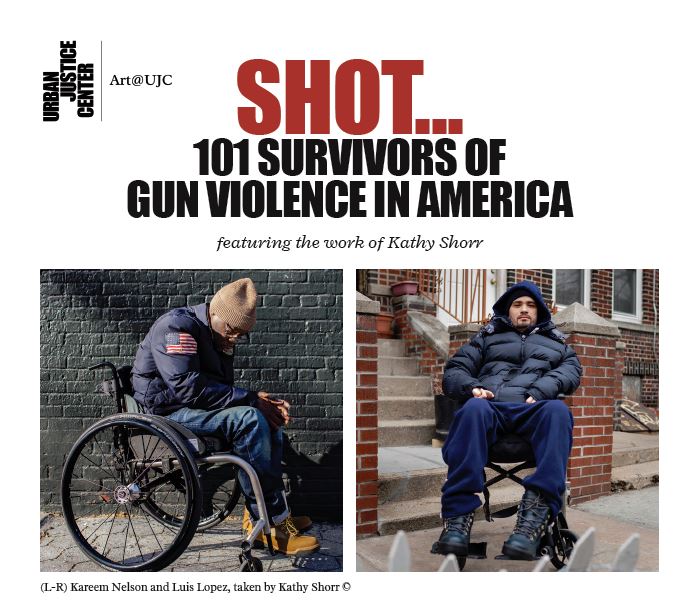 The goal of SHOT: 101 Survivors of Gun Violence in America is to focus attention on the survivors of gun violence- people who have been shot and survived the experience. From across the United States, survivors from different socioeconomic, political, ethnic, gender and age groups including high and low profile shootings are the united faces of gun violence, 101 varied, relatable people who have gone through a life altering experience.

The majority of portraits are taken at the location of the shootings. This adds another dimension to SHOT as most of these locations are banal and “normal” places we all visit: shopping centers, places of entertainment, church, neighborhood streets, movie theaters etc. Many of the shootings actually occur in the survivor’s homes and cars. This again gives the viewer another chance to connect with the participants and to imagine just how close we all are to the possibility of this happening to someone that we know.

SHOT is the work of Kathy Shorr, a freelance photographer based in New York. Her work has been exhibited widely at such galleries as Howard Greenberg Gallery, NY and Sariedo Gallery, NY. Her series, “Limousine,” was included in the prestigious Visa Pour L’Image, International Photo-Journalism Festival in Perpignan, France. Her work has been published in The Guardian, Newsweek Japan, Photodot Korea, Popular Photography, Newsweek, French Photo, Camera Austria, Photo Review, On Seeing, The New York Observer, The Village Voice, Huck, Juxtapoz, The Huffington Post, People Magazine, The Denver Post, The Times Picayune, The Atlantic, Slate, BBC and American Photo. She teaches documentary photography at schools and non-profits including The School of Visual Arts.